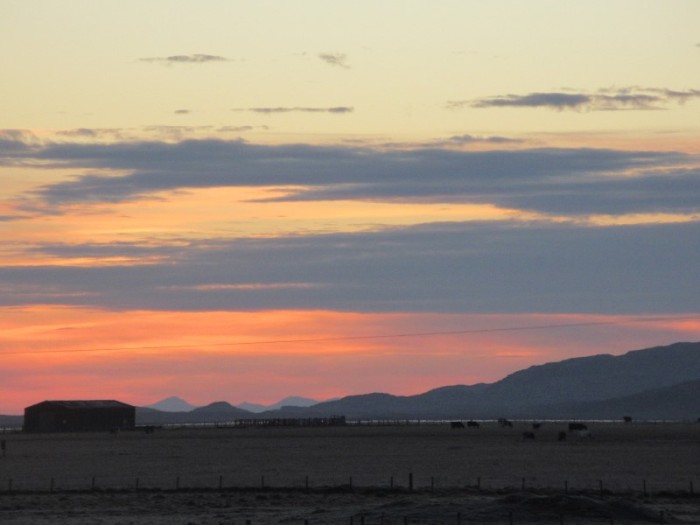 Before sun-up, 5 December. View looking south-east from Ardivachar, taken 0837. Sunrise time for our postcode: 0853 (though the actual appearance of the sun is about half an hour later at this time of year since its actual rise is obscured by Thacla, on the right of this photo).

Great views all round this morning, aided by starry skies overnight and an absence of cloud cover, a complete absence of wind and thus a sharp frost which left the grass crunchy underfoot and the light clear and the visibility well-defined. There were very strong views to the hills of Harris to the north, about 65 kms distant; to the Monach Isles to the north-west; east to MacLeod’s Tables and the Cuillins (red and black) on Skye; and, here, south-east to Thacla’s foothills and, in the far distance, the 70kms down to Rum. That’s also a thin sliver of Loch Bi following the photo’s lower third. And soft colours everywhere: gentle pinks and blues and greys reflecting the early sun to the north and west; stronger, but still very soft focus, oranges and blues to the east and south.