Thoughts and photos from a Scottish island

Just time left in September to drop in with a new sunset picture, taken tonight some fifteen minutes after sunset which tonight was at 1908.

Here, we’re looking over the croft land neighbouring where we live and, given the time of year, more or less due west, instead of the north-west which marked sunset at the height of summer, and with few sheep still left around Ardivachar after the sales of the last few weeks. With a fairly stiff easterly/north-easterly breeze, and a forecast temperature dropping below ten degrees, it’ll feel about half that overnight and, with the generally clear skies, sunny in the daytime, there’s even a few reports of potential ground frosts across the highlands and islands.

It’s enough to turn a few thoughts towards warmer climes!

It must be a bit odd for musicians to come to a gig and find the dressing room/green room absolutely front of house and on open display as the punters arrive to take their seats. Nevertheless, this was no ordinary gig as Aly Bain and Phil Cunningham, legends on the international traditional music scene for generations and with musical palmares the length of not just one arm but both outstretched, and uncrooked as a musician’s would usually be, arrive in Iochdar village hall, down at the end of my road, to play my birthday gig as part of their 2019 Scottish tour.*

They were here last year, too, although for one reason or another I missed it then (I do have a regular complaint that events on these islands tend not to be advertised well here unless you’re on that bookface thing). I had wondered why such stars – musical heroes of mine since the traditional scene exploded into my musical education in the 1980s – would play precisely here, and not least (still) without a new record to promote: partly for the reasons of time and effort involved in getting here and in making it pay (I guess it doesn’t – but that’s probably beside the point), but more importantly because we don’t have a strong fiddle tradition on the islands (though we do of course have a box one). (Today, down in Am Politician on Eirisgeidh for a birthday dinner, it appeared from talking to the publican that Phil had turned up last year, box in hand, for an inpromptu evening session: learning new tunes is, naturally, the lifeblood of any new musician.) There is, however, a sort of family connection with Uist and Benbecula for Phil, and both people who had maintained the connection were of course in the audience and got a shout out as well as a dedication from the stage. It was indeed that sort of gig.

Aly and Phil have been playing together for 33 years and with a background in music stretching back for fifteen years before that: Aly in Boys of the Lough and Phil in Silly Wizard. Both have the sort of status that entails writing tunes for commissions, both for paid jobs in TV productions and for other famous musicians, and having tunes written for them, but they still both enjoy each other’s company as well as have a key role in providing the active emotional support for each other that we all need.

With a musical heritage this long, picking a list of the sets of tunes you want to play is both tough and easy – tough because selecting any one track leaves a load of other similar-sounding combinations behind; easy because, with an appreciative not to say reverential crowd, you know that any selection you can make will go down well. So, the tunes have to fit and to deliver coherent sets which does the job of a tune-playing band but, not least, to the satisfaction of the musos themselves: stirring people in some way, playing on their heartstrings and chiming with their emotions. Here, we had the hits – Fairy Dance to close (from which the picture below is taken © Ella Wronecka – thank you!), with Hangman’s Reel (the theme tune from the BBC’s ‘Down Home‘ series, which properly introduced me to Aly Bain) and Jean’s Reel (likewise for Phil Cunningham, and fondly remembered by Andy Kershaw as the track he’d seen Cunningham absolutely shred after sinking about six pints; and the tune he’s apparently played at every one of his gigs ever). 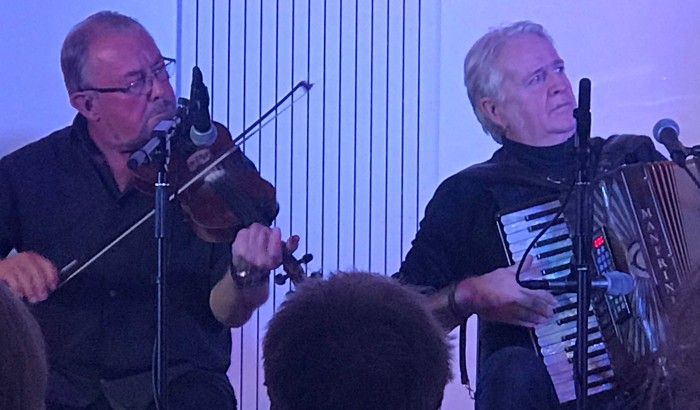 With Aly seriously ill in hospital earlier this year ahead of a triple heart bypass, and with a consequent warm-hearted expression of appreciation for our NHS, the first half – while mixed in with faster-paced sets – took on an elegiac tone, with ‘So Long, Liam’ an absolute stand-out. Other airs were similarly beautifully and breath-takingly sustained, drawing out the audience’s emotion right to the length of the bow, and for a brief second beyond. The second set, with the feature songs mentioned above, tended to be faster but still interleaved the more complex rhythms of the boys’ connection with Swedish musicians with airs and waltzes and, in some sets, bravely transitioning from waltzes to reels within the same set. Just the two of them on the stage but, with a bit of skullduggery, and no little skill, this was a whole band of fired-up musicians up there. All interspersed with lengthy introductions to the tunes which served to get the breath back, led largely by Phil, featuring humour (including a wonderful tale about playing for the Queen at Balmoral (here, for a wee flavour) which might well explain why the honours are still lost in the post, boys), shaggy dog stories, a fair amount of sly self-references, technical notes about the music and rhythms, and anecdotes drawn from their astonishing yet very human musical trajectories and careers, this was a right proper ceilidh.

Which brings me to the one slightly downwards note: the gig was wonderfully organised by Mary and the Ceòlas team, with the aid of the Talla an Iochdar committee volunteers, but it was disappointing to see the hall laid out for a fully sit-down gig. Now, traditional music isn’t only for the old’uns and it was great to see some junior enthusiasts too, and people who are, well, (still) older than me were the core of the audience so we need some chairs. But this music is made for dancing and some audience participation via a bit of an opportunity to get up offa that thing and show a few moves might well have improved the night even more by dint of giving a bit more feedback to the musicians. Foot-tapping and sincere, warm and grateful applause gets you so far but nothing tugs a musician’s sensibility more, or drives them further and faster, than people moving and grooving to the music they’re creating right there, right then.

There’s still some gigs left on the Scottish tour before it winds up in a homecoming gig at the Queen’s Hall in Scotland’s other (east coast) capital at the end of the month so, if they’re coming anywhere near you, go and see them. Not only have they absolutely still got it but they’ll send you out into the night aglow and warmed and inspired in the way that only traditional music, connecting souls and spirits and different understandings to the universal themes that bind us all, can properly do.