My spring 2020 column for BECTU, the union for creative ambition within Prospect, addressed some of the issues behind the January announcement in the government’s Telecoms Supply Chain Review.

You can read that post directly below, or via the separate page link over on the left, but it has now been superseded by yesterday’s announcement that Huawei equipment must be removed from telecoms networks in the UK by 2027. This stems from fresh advice from the National Cyber Security Centre that it could:

No longer offer sufficient assurance that the risks arising from the use of such post-sanction manufactured equipment can be mitigated (para. 18).

What has changed in the meantime is that the US, in reaction not least (although clearly not only) to the UK’s decision in January, decided in May to block Huawei from buying semi-conductors made by US manufacturers – this is the sanction to which the NCSC refers. The critical importance of this in yesterday’s decision is recognised by the NCSC in the title of its collection of pages on the subject. As neatly explained by Gordon Corera in his interview for the BBC’s Newscast (the news item, with three different interlocutors, covers most of the programme starting from 03:45; but see, in particular, Corera’s segment starting from 6.00), what this essentially means is that, firstly, Huawei needs to find a new source of semi-conductors; and, secondly, that the UK’s intelligence services, which examines Huawei’s equipment regularly, would as a result not be able to guarantee they could give the equipment the same security vetting.

I’m by no means a technical expert, so take this with the requisite amount of salt: but I simply don’t buy this as an explanation. The notion that the UK’s intelligence services are unable to investigate the security of alternative (non-US) sources of semi-conductors, as a part of their regular examination of Huawei’s involvement in the UK’s communications equipment, and then to vet their use, appears on the face of it to be an extraordinarily lazy, sloppy claim entirely unworthy of the men and women in the NCSC. But, like I say, I’m no expert here.

There are, of course, many reasons to be careful of dealings with China, new security law in Hong Kong and its internment of Uighur Muslims (China says that the camps are closed, former detainees having ‘graduated’) being but two.

What the decision does do, of course, is tie the UK (now ‘liberated’ from membership of the European Union) very firmly into the US orbit, and quite specifically a Trumpian view of the world. Whatever the technical and security aspects of the decision, such a decision is highly favourable to Trump and the UK has thus been heavily leaned on, Trump’s self-congratulatory pleasure at the decision doing nothing to minimise such a conclusion. It couldn’t be clearer, at this point in the UK’s history, as to where this country’s political elites see its future, regardless of the likelihood of Trump losing the forthcoming election and US foreign policy changing as a result. China has reacted angrily, foreshadowing ‘public and painful retaliation’ as a means of preventing China from being seen to have been bullied. At this point, I’m very much reminded very much of this wonderful cartoon, copyright of the New Zealand Herald: 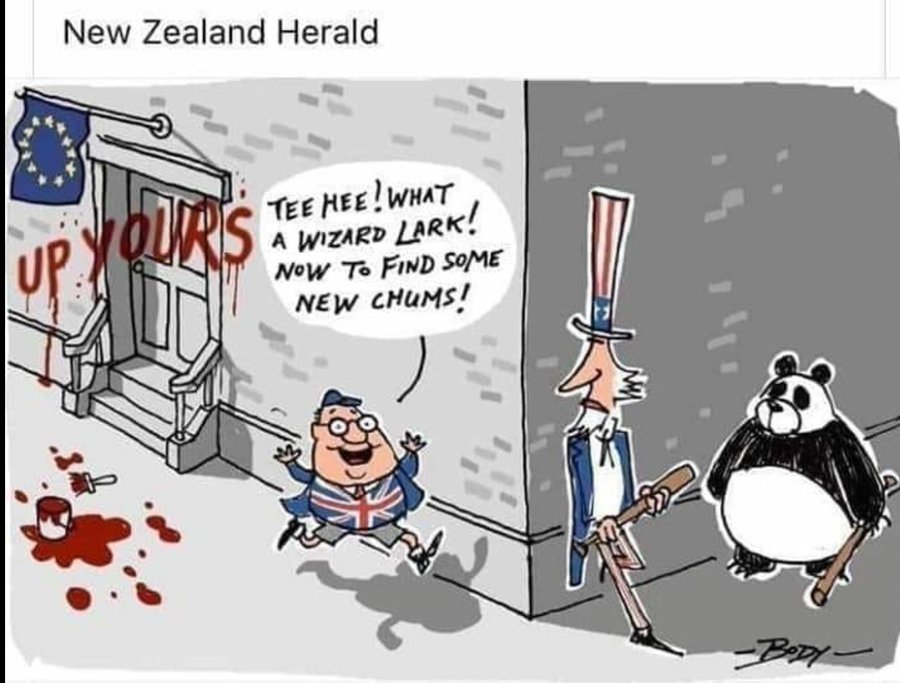 And, once China has done for us, we’re likely to find the US agricultural industry next donning the guise of Uncle Sam.

Politics apart, the roots of the malaise in which the UK has now come to find itself, as a consequence of a decision which is likely to put back the broadband connectivity timetable, not least in rural and small towns, can be traced back to Margaret Thatcher, as my colleague Keith pointed out back in January. Decades-long reliance on ‘the market’, on privatisation and on an abandonment of industry and long-term investment in favour of profit-taking has left the UK exactly the sort of state which is not only reliant on the cheapness of foreign goods but which has come to see price as the ultimate determinant of decision-making. Be in no mistake, whatever the quality or advantages of Huawei kit, this country’s telecoms firms are using it because it is the cheapest around – as a result  not least of extensive R&D investment by the Chinese government – and because its deployment therefore maximises the return to shareholders.

Indeed, telecoms companies are now faced with greater costs as a result, not so much in having to strip out kit because the likelihood is that much of this is likely to have been replaced by 2027 anyway as a part of the continual upgrading of the network, but in terms of the likely greater expense that a removal of one of the three major players will entail, as Rory Cellan-Jones goes on to explain in his contribution to Newscast (from 11.40 and see, in particular, from 15.00). Nokia and Ericsson were already more expensive; they may yet get more so as a result of the narrower telecoms equipment supply market the exclusion of Huawei means. On top of this, there is the impact of the likely post-Brexit lack of a deal on trade in goods with the EU, judging by the current state of negotiations, as well as the continuing decline in the exchange rate (the £ has slipped by 6.2% against the euro since 1 January alone, standing today at just €1.10).

The decision raises a substantial number of policy questions, chief among which would appear to be these.

Firstly, there is the Investor-State Dispute Settlement (ISDS), which gives private companies from one signatory state the right to sue governments of another when policy changes. This has a controversial history and was the cause of the EU (eventually) dropping negotiations with the US on the Transatlantic Trade and Investment Partnership (TTIP) free trade deal. The failure of the EU to tie up many free trade deals was, of course, one of the arguments mounted against it by Brexiteers, though we should note the involvement of trade unions and other civil society actors in persuading the European Parliament to put pressure on the Commission to drop the deal. The US (inevitably) is a fan of ISDS and we’re thus likely to see it included in US demands of the UK as part of a free trade deal. Representatives, activists and negotiators need to be prepared for that. In this context, China’s open question as to whether the UK can ‘Provide an open, fair and non-discriminatory business environment for companies from other countries‘ raises substantial, and reverberative, questions.

Secondly, BT reckons that the additional costs of this decision can be absorbed within its estimates of the cost of the original January decision (£500m). That may or may turn out to be so – it looks somewhat optimistic – but, equally, BT is not the only telecoms company. The potential costs of £6.8bn identified by Mobile UK in April last year look geared towards a somewhat different set of circumstances, but costs there will be. It is extremely unlikely that we will see UK companies sue the UK government for a change in policy affecting the climate of business decisions, in a kind of internal ISDS, but there will, instead, be substantial lobbying for other mechanisms under which these additional costs can somehow be recouped (in terms of forbearances on network roll-out, more favourable terms for investment, etc.). Those costs will, therefore, be born in the end by UK citizens.

Thirdly, and going back to the reasons why UK telecoms companies find themselves in the position of buying Huawei kit, there is the interesting context of the UK’s industrial policy. Non-existent since the time of Thatcher, which has seen all manner of technological companies either fail or sold off ahead of their time, from Marconi to ARM Holdings, while the UK government stood on the sidelines preaching about ‘the market’, industry policy seems to have gained a new focus. In this light, the publication last week of a policy paper on the UK’s Research and Development Roadmap looks like a step forward. This is, of course, Cummings’s grand plan. A commitment to spending £1.5bn more on R&D each year on average, taking the total to £22bn by 2024/25, to make the post-Brexit UK a global centre for science and innovation, certainly looks ambitious, not least in the face of governments’ deliberate act of vandalism in running down engagement in such areas and their encouragement of a privatised, share option focus to the rewards which such innovation ought to bring.

Now, this blog is no fan of Dominic Cummings, as readers might well be aware. But there is at least significant potential in this, not least in terms of establishing a route out of the malaise into which the lack of industrial policy has led us. There are questions that arise, including the extent to which public sector money can generate further private sector investment as well as, most critically, the ways in which this can generate, in non-military areas, a sustainable, zero carbon economy. The question of collaboration, across Europe, is also critically important to such a vision.

But what is also important is the question of ownership and the retention in the public sector, for the long-term benefit of everyone in this country, of what has been generated by public money. Capitalism, based as it is on inequality and exploitation, cannot generate a green economy nor, in the current context, a recovery which is geared towards sustainability. That needs planning and design, improved democracy, and it implies a key role for the public sector in the launch of a Green Recovery Act for which Common Wealth, a think tank supported, among others, by the Communication Workers Union and the Trades Union Congress, has recently called. Organisationally, it means democratising the workplace so that everyone has a stake in, and shares, the wealth that their labour is creating.

This is probably an issue which is not on Cummings’s horizon nor that more widely of the party actually in government, but it needs to be. The focus on short-term profit, and the focus on the supposed primacy of the private sector, have both had their day.

The route out of any malaise is – as with any pit – firstly to stop digging; and then to turn attention to thinking on how to build a ladder. If the Huawei decision means that we have indeed now stopped digging – and that is a big ‘if’ – it may be that the Roadmap, allied to a Green Recovery Act, provide some of the rungs of the ladder. Ultimately, however, we can’t build a new, bottom-up industry policy which puts right the problems ever since the Thatcher revolution without addressing that key question of ownership.

Edit 16 July: Worth noting in the context of the security concerns over Huawei that the European Court of Justice has this morning struck down the EU’s ‘privacy shield’ arrangement with the US on the grounds that US surveillance of data transferred to its territory (e.g. by Facebook) is ‘not limited to what is strictly necessary’ – i.e. that US data surveillance of communications is over-obtrusive.