We’re just back from spending a week in Gdańsk, having travelled to attend a friend’s wedding. With an unexpected spare day to myself as wedding preparations continued, I had a daunder up Góra Gradowa, the low hill overlooking Gdańsk’s main train and bus stations. This houses Napoleonic era fortifications, in the brick-built, grass-topped bunker style that you can also see elsewhere in modern-day Poland for example at Modlin and in Giżycko (Polish required); as well as a science museum devoted to the Polish-born astronomer Jan Heweliusz. Once you get above the tree line, as I knew, Gradowa affords a fine view over Gdańsk’s (inevitably rebuilt) old town to the south-east – but with my eye drawn, as it always is, to the north-east, to the cranes of Gdansk’s extensive shipyard Formerly Known As The Lenin Shipyard.

With the day fair, I left Gradowa in the direction of the shipyard, walking past the shipyard train station and the bits of the yard that are still working (with the approval of the EU’s state aid authorities, I might note), past the slightly edgy clubs set up amidst the abandoned bits and in old shipping containers (for those that like their dance culture to be intermingled with the smell of industrial paints) and back towards the town via the famous Gate No. 2. It was here that the 21 demands of the August 1980 inter-enterprise strike committee, written out on boards of plywood, were attached to the Gate (the boards once again present in situ – though surely a facsimile – which wasn’t the case on my first visit here back in 2012).

These days, the Gate (still emblazoned with Solidarność favours) is emblematic rather than functional and the immediate contextual setting for the European Solidarity Centre aiming to provide a museum for the role played by the wider Solidarity movement (and of which NSZZ Solidarność, the trade union, is listed as a founder). I wandered in, and then back out again, slightly deterred by the (albeit very modest) admittance fee (20zl; £4) but attracted back more by the Memorial to the Fallen Shipyard Workers which stands adjacent to the Gate.

The establishment of such a Memorial was one of the demands of the 1980 shipyard strikers. It doesn’t feature as one of the inter-enterprise strike committee’s 21 demands, which, drawing on strikes elsewhere in Poland, had moved on substantially from the bread and butter trade union issues which had sparked the strike in Gdańsk towards mounting a political challenge. The demands in Gdańsk included the re-instatement of Anna Walentynowicz, the crane driver and independent union activist whose dismissal five months before retirement had sparked the strike there (and in tribute to whom there is currently a series of information boards around the Memorial), as well as that of Lech Wałęsa (sacked from the shipyard in 1976) himself (and with whom Walentynowicz clearly had major disagreements). These were issues that had been settled within Gdańsk itself, with the Memorial arising out of the subsequent Gdańsk Agreement (interestingly, not only are the originals of the Agreement missing; no links are immediately available online either).

Regardless, the Memorial (unveiled within just a few months of the Agreement being signed) is dedicated to those killed in the 1970 riots across northern Poland over price rises and whose three crosses, topped with ship anchors, were inspired by the first three workers from the shipyard to have been killed. What I hadn’t noticed previously about this substantial memorial, at 42m standing almost as high as Gradowa, was that the ship anchors are ‘crucified’ with metal nails and ropes to the tops of the crosses – thus underlining in one stroke the commemoration of the fallen workers as martyrs and the significant role the Church played in the activities of August 1980. The tribute slabs at the front carry – in Polish, German, English, French and Russian – the message:

A token of everlasting remembrance of the slaughter victims.

A warning to rulers that no social conflict in our country can be resolved by force.

A sign of hope for fellow-citizens that evil need not prevail.

Other critical messages are included in the design of the Memorial itself and, along with Wałęsa’s own comment about this being a harpoon in the body of the whale, it is impossible to see the authorities within Gdańsk as having failed to recognise the significance of that to which they had agreed in establishing the Memorial. 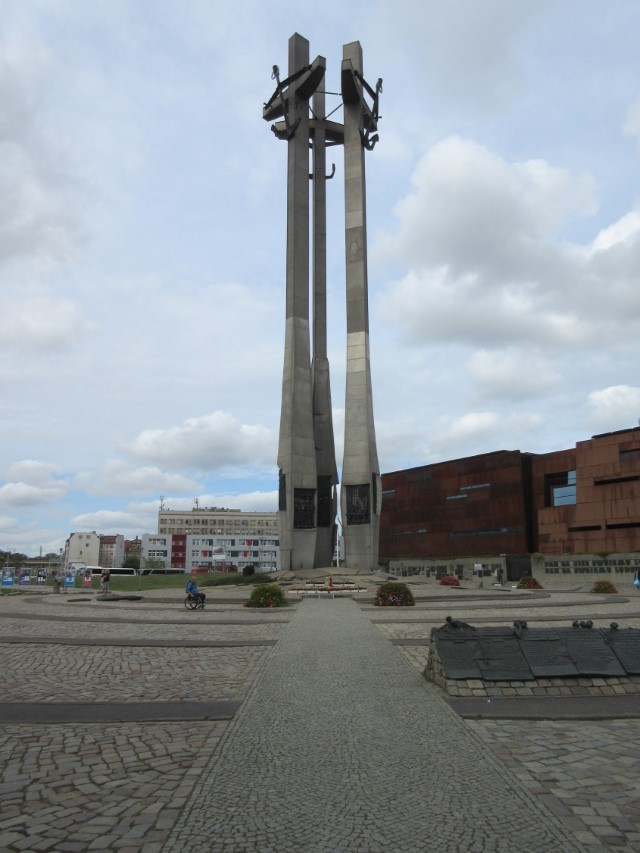 Whatever the subsequent failures of the Solidarity movement in snatching defeat from the jaws of victory, the trade union-driven aspects of the inter-enterprise committee’s 21 demands, including the right to establish independent trade unions, with acceptance of the right to strike and with protection for strikers, continue to have resonance, as the TUC debated earlier this month. So indeed does the demand for (effectively) shorter working time and for improved workplace rights for parents. Getting all these back on the agenda, in the era of applications of artificial intelligence and post-Brexit, continues to be a challenge for real trade unions whether in Poland or in the UK; as much as in today’s ‘gig economy’ as in 1980s shipyards.

It’s also a useful reminder that much trade union activity, and regardless of its industrial origin or context, has a profoundly political character. Introducing change in the workplace, and change within the societies within which workplaces function, continues to be a political act.

A period of radio silence for me, then, as a trip to Poland for a bit of holiday and a wedding was accompanied by a deliberate decision to leave behind my trusty laptop in order to make extra room in my suitcase for a few more shirts – better clothed sartorially I might, perhaps, have been but also somewhat more naked in that, like a lot of us, my life centres on the connectivity provided by my laptop in ways that are more flexible and easier to accomplish than they are via a purely hand-held, if rather old, device. (Even if, as is the case even in remote Poland, just a handful of kilometres from the border with Lithuania, 3G connectivity is a lot better than it is here in the UK.)

Imagine my surprise, then, to find out that, after a trip of 200 miles from our base here on the islands down to Glasgow, a 1,250-mile airplane trip across Europe to Warsaw and a 150-mile drive up Highway 61 () to the outskirts of Augustów, and then a bit further still towards Suwalki, our initial base at the small village of Dowspuda was just 1km out of  Szkocja:

The army general concerned supported the rather ill-thought out November (1830) Uprising against the Tsar, and subsequently fled abroad, and so little remains of his Palace today other than an impressive portico and a tower, most of the rest of the stonework having been removed for use in local projects elsewhere (the windows, for example, found their way to the church in Suwalki), and the remains were subsequently destroyed. There are, however, plans to re-construct the palace as a five-star hotel – something which raises interesting points of discussion, regardless of the Polish historical context, about whether culture is really better served by looking backwards rather than forwards. Nevertheless, the former guardhouse has been beautifully regenerated as a tourist centre providing well-appointed rooms as well as very welcome employment opportunities for people with disabilities.

As for the Scots farmers, they came, they stayed and were allowed to build houses in a village they deliberately called home, constructing their lives there in the way that migrants have always done. Interestingly, there is at least one other Szkocja in Poland. Travelling the length of our Szkocja, we did see signs naming the village but none with the name crossed through in the way in which the geographical limits of Polish (and other east European) towns and villages are routinely identified – thus seeming to prove that there is, indeed, no end to Scotland. Rumours that the local Polish dialect is influenced by Gàidhlig have, however, still to be confirmed at the time of writing 😉 .