Well, who knows what will happen when this thing is all over, but I reckon that an ability to brew beer is going to be a much sought after skill in the new world. So, ahead of some planned new investment in, er, plant and some raw materials to facilitate a bit of expansion, here I am dipping my toes back in the water with another stovetop brewing kit. 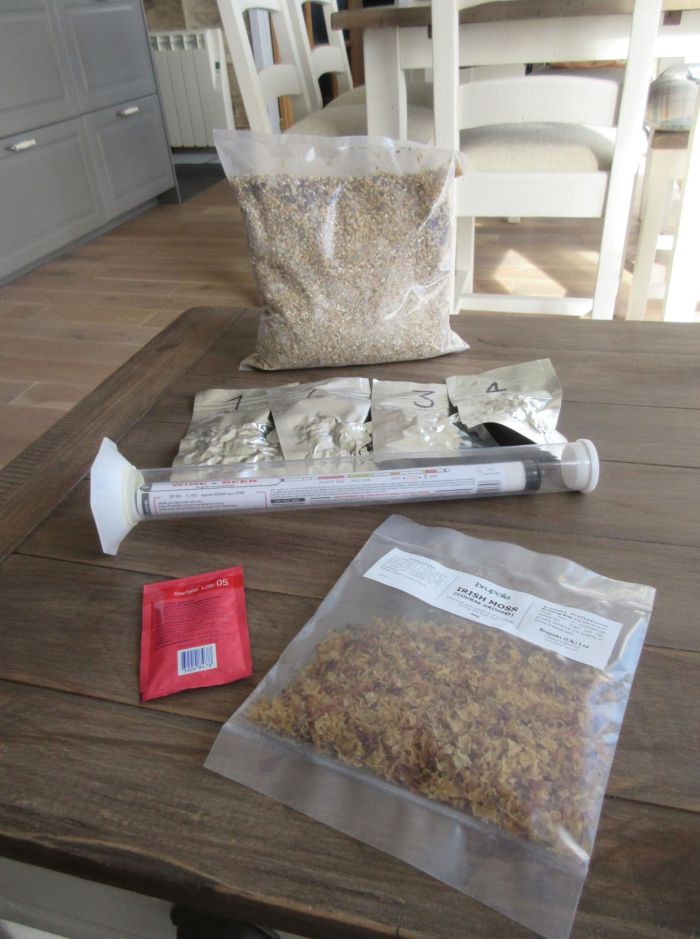 Yep – brewing beer at home is as straight-forward (though not simple) as beer ought to be: malt (at the back), hops (in the four (count ’em!) foil packets), yeast and water. When brew day comes – which might well be tomorrow in the continued absence of Saturday football to distract me for the whole afternoon – I’ll be brewing 4.5 litres (just shy of 8 pints) of a black IPA: a dark beer packing a mind-bendingly confusing hoppy punch.

Just as with the earlier efforts, this is an all-grain brew, with the addition this time of some Irish Moss to clear the protein haze and a hydrometer which will both test when fermentation is complete as well as tell me (in time) the strength of my brew. But, otherwise, things pretty much remain the same, including the equipment used the last times. With the single exception that there’s a bit of dry hopping involved with this one: so, a new skill, too.

I was tempted to dive back into brewing when I was up in Shetland back in January. Here, I bought James Morton’s 2016 book Brew, followed not long after by a walk in the misty rain of a Lerwick morning up to Lerwick Brewery where John, the Head Brewer, and Kathryn, the Marketing Manager, were kind enough firstly to give me a tour and answer my questions about the process as well sample a few of their beers. Indeed, my choice of kit this time around was, perhaps unconsciously, informed by their Blindside – a lovely example of a black IPA (sampled for the first time on a visit to Lewick last summer). Morton – now a junior doctor but, more famously, also a baker and a contestant on Bake Off, if you’re recognising the name or otherwise remembering the knitted jumpers – is a controversial character, both in terms of Shetland’s fishing industry and culture and in terms of Scottish politics, as well as a self-confessed dilettante (a relaunched blog with just two posts and nothing since last July). Nevertheless, he’s written a wonderful book on brewing beer at home with exactly the right mix of photographs, information, Heath Robinson and enthusiasm to de-mystify the process and be encouraging to brewers across a range of skills, knowledge and experience. And, indeed, palates.

My black IPA kit came from brewuk, based in Shewsbury and predominantly mail order seller of all things brewing, started back in 2008 by a husband and wife team the first of whom, coincidentally, authored the book on home brew beer which piqued my interest. It seems it’s not just me looking to use the time during this crisis to develop brewing skills, as a little note on the front page of the website this morning reads ‘Due to the unprecedented increase in orders over the past few days, we have suspended taking any orders until we can clear the current backlog.’ So I’d better get cracking then, to get in a good position before the MAC adds ‘brewmaster’ to the current range of UK shortage skills.

Singing as I go, perhaps under my breath, some recent lines from Jeffrey Lewis’s ode to the crisis ‘Keep It Chill! (in the East Vill)’:

Maybe a wide alliance will respect more science
in every nation and each state
We’ll take total warning about global warming
and when the virus soon blows out
we’ll have a full-on call for healthcare for all
and better safety nets rolled out
With old ways on freeze and new priorities,
this could be just what sees us
set things more at ease.

Plus a better regard for the jobs, and the pay levels, and the status, of those who really are the key workers in this country.

One thing is clear that, once this is all over – nothing can be the same as before: this virus will (and should) change everything about our understanding of what is important and what is the value of the structures and systems and shibboleths we have invested with so much truth and we simply can’t, afterwards, go back to doing what we always did.

Until then, Slàinte Mhath.

2 thoughts on “Just add water… and a bit of time”